Skip to content
Dry
0%
Wet
0%
Snow
0%
Comfort
0%
Noise
0%
Treadwear
0%
Overall
0%
at Amazon.com at TireAmerica.com at TireRack.com at DiscountTire.com at TireBuyer.com at PriorityTire.com at SimpleTire.com

Michelin is the second-largest manufacturer of tires in the world, just slightly behind Bridgestone. Naturally, the French company designs and makes a lot of tires, which cover any vehicle that ever toughed the Earth’s surface.

One of the dozen passenger-car tires Michelin offers is the X Tour A/S T+H. You might not be able to find this all-season touring tire on popular online retailers, such as Tire Rack, though. That’s for a reason – it’s offered only in Costco.

So, does this mean that Michelin specifically developed a tire for Costco? Well, of course not. Developing a new tire requires a lot of time and money. Moreover, as I said, Michelin already has dozen passenger-car tires in its lineup, including all-season touring tires.

Therefore, copying the design of other products is probably a much easier and less costly alternative. And, Michelin did just that. The elephant in the water here is that the X Tour A/S T+H is absolutely the same tire as the Defender T+H.

So, why does Michelin offer the same tire in two different names? It’s probably a deal with Costco, which wants to brag about having exclusive tires made just for members. It sounds like you’ll be a part of something bigger when you’re really using the same tire as most passenger-car drivers in North America.

With that said, borrowing from the Defender T+H is certainly not a bad thing. Michelin’s standard touring all-season tire is one of the most accomplished products in its category. But, of course, that is always expected from a tire with the Michelin logo on the sidewall.

The Michelin X Tour is available in many popular sizes, ranging from 15-inch wheel diameter to 17-inch wheel diameter. These dimensions are a good fit for compact cars (Corolla and Civic), minivans, mid-size sedans, and even some coupes and crossovers.

With that said, let’s see what features Michelin employed in the X Tour to make it a viable option for drivers (spoiler alert, the tire has the same features and design as the Defender T+H).

After that section, you can read my detailed Michelin X Tour A/S T+H review, where I’ll cover performance on dry and wet roads, snow traction, durability, and comfort.

What are the features of the Michelin X Tour A/S T+H?

On its website, Michelin states that the X Tour A/S is a tire developed to provide long treadlife, all-season safety, and smooth and quiet ride. These qualities usually decorate most premium touring tires, so nothing is out of the ordinary here.

To achieve those things, Michelin utilized an improved all-season tread compound, that focuses on even better wear characteristics and longevity than the previous generation. The compound also features a high silica content, which improves traction on wet surfaces.

The rubber compound is molded into an asymmetric tread design, which is developed to reduce road noise and improve ride quality. Moreover, the tread pattern features the IntelliSipe technology, which utilizes zig-zag sipes in the tread blocks of the tire. These sipes create more biting edges than waved or straight sipes, which improves snow traction and braking but also helps in rainy conditions.

For even better wet traction, Michelin utilizes four wide circumferential grooves across the tread of the tire. These grooves channel the water through the lateral notches, which reduces the chance of hydroplaning occurring, even in very heavy rain.

To improve tread wear even further, Michelin utilized its MaxTouch Construction technology, which helps distribute the tire forces evenly throughout the contact patch. This limits the chance of the tires wear unevenly, which elongates the treadlife.

Meanwhile, Michelin also made sure that the X Tour improves the fuel economy on any vehicle. The tire features specialized materials that reduce the rolling resistance, which can save you fuel in the long run.

The internal construction of the X Tour is standard for a touring all-season tire. It features two wide steel belts, reinforced by a single ply of polyamide for better responsiveness, and a two-ply body casing for better ride quality. 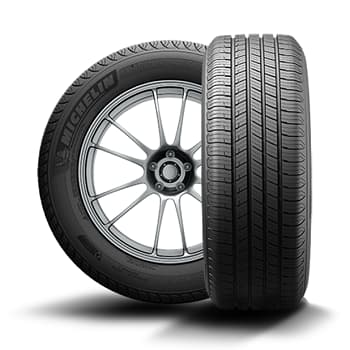 Michelin utilizes the regular TWI’s (tread wear indicators) in the X Tour, which help the driver better monitor how much tread there is left on the tire.

The minimum tread depth of the X Tour is 2/32-inch. This is when Michelin, and also authorities, state that the tire can’t work on wet surfaces anymore. When that happens, you should immediately replace the tires with a new set.

Fortunately, you can easily tell if your tire has enough tread left with the TWI’s. These are narrow rubber bars built into the circumferential treads of the tire, which are recessed when the tire is new.

As the tread wears down, the bars become more visible. When the tread depth falls to 2/32-inch, the bars will be completely flush with the surface.

Luckily, at least on the Michelin X Tour, that won’t happen soon. This tire has exceptional treadlife, confirmed both by owners and by the outstanding warranty. Michelin provides an 80,000-mile treadwear warranty, which is among the best in the touring category.

First of all, let me remind you that the X Tour is a standard all-season touring tire. This means that it isn’t designed for fast driving and extreme cornering speeds. That’s why, when I say something good about the tire, it’s within the touring category.

With that out of the water, the X Tour has some of the best handling characteristics in its category. The X Tour is pretty responsive for a comfort-oriented tire, and it has excellent cornering grip.

The traction for acceleration is also excellent, and the braking distances are also among the shortest in the all-season touring category.

Overall, the X Tour is one of the most accomplished touring all-season tires on the market when it comes to the driving experience.

Thanks to the deep tread pattern and carefully-designed sipes, the X Tour continues to impress on wet roads. Here, though, some competitors offer a slightly better experience, but the X Tour is still completely safe for daily driving.

The tire possesses enough traction on damp surfaces, it’s safe in the corners, and has short braking distances. Moreover, the hydroplaning resistance in heavy rain is commendable, and the tire doesn’t lose traction easily. The braking distances in very wet conditions are among the best in the category as well.

To sum it up, like most Michelin tires, the X Tour is an excellent choice for daily driving in places with frequent rain.

The X Tour is no slouch in the winter. Thanks to the zig-zag sipes, you can expect good traction in light snow, and also short-enough braking distances.

However, the competition recently launched touring all-season tires that are even better over snow, and some of them even work over ice.

So, the X Tour A/S is far from bad in those conditions, but I expected more for the price to be honest.

Even though you can put a set of X Tour’s on some crossovers, this tire is far from the best choice for off-road driving. Sure, you can use it over hardpacked surfaces for shorter distances, but be careful if those surfaces are wet – you might get stuck.

Moreover, the X Tour isn’t protected from cuts and chips, and prolonged exposure to sharp objects might easily damage the tire.

Michelin did a great job of reducing road noise. Actually, this is one of the quietest touring all-season tires right now. Furthermore, the X Tour also rides very well, both on the highway and over uneven surfaces.

Should I buy the Michelin X Tour A/S T+H?

Well, you should definitely cross-check the price with the Defender T+H, because they are a carbon-copy of each other. Just purchase the tire that’s cheaper at the moment.

The X Tour is a good buy when compared to other premium rivals, also. The tire doesn’t have glaring disadvantages, and most importantly, handles daily tasks with aplomb.

That said, you can have similar experience in much cheaper tires, such as the Continental TrueContact Tour. And, the difference in price isn’t insignificant – the TrueContact Tour costs almost 20% less in some dimensions. 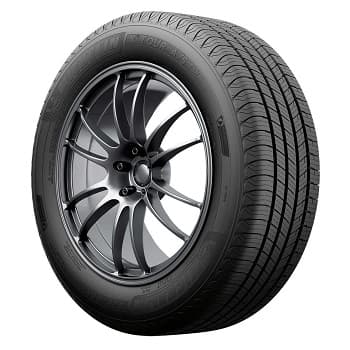