So, does white smoke make differences from other colors of smoke? And, how to tell if your car needs to be taken care of?

Having a car or any vehicle of the same kind will cost proper attention. It’s not always about getting car insurance, monthly check or updating new accessories but also well-paid observation.

To experienced drivers, it is less difficult to diagnose problems from smokes. But, can everyone be so sure?

Well, we don’t want to encourage self-car-service. Of course, anything wrong will be promisingly fixed smoothly by mechanics.

However, there are actually something you can see and tell before spending money, at least with the white smoke.

In this article, let’s equip yourself with basics experiences and tips about what causes white smoke from exhaust as well as effective solutions. 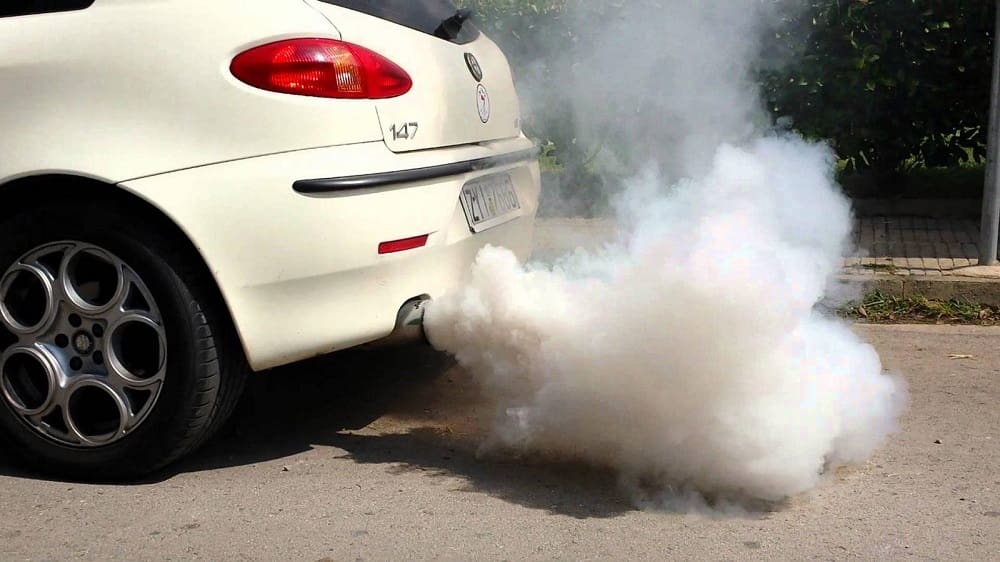 Why does your vehicle release white smoke?

White smoke most of the time is water evaporation and it happens with cars, too.
Inside, the pipe happens to contain a little of condense. When the engine starts and heats up the pipe, naturally, water evaporates. White smoke, as a results, is breathed out with pressure.

It happens quite commonly especially during speeding up which even brings on more heat, then jeopardize evaporating. So, don’t be panic when seeing smoke come out of exhaust.

However, it should stop right away when the car starts moving and the speed stabilizes. If not, you must pay serious attention.

The worse and unwelcomed case is that more condensed and not-like-water-smell smoke. It’s highly possible that your inside cooler are getting weird.

The liquid inside cooler will also be able to evaporate. If it comes out from your exhaust, there must be something wrong with that part as they are supposed to be separated.

Most of cases we recorded was cracked coolant. It sounds bad, doesn’t it? And, it is truly bad situation. But at this point, it’s hard to know exactly what’s wrong inside or just more condense.

Same with cooler, cylinders also can break. The crack doesn’t need to be big to create a problem. Leaking oil can happen just through a very tiny cracks which you cannot even see by untrained eyes.

Oil leaking from cylinder will mix with water on exhaust pipe. White smoke is still from condense as normal but the smells or density will be different as there’s not just water. But if you get white smoke from exhaust on startup, it might be from a cracked or warped cylinder head.

The whole system inside, beside cooler and cylinder head, includes EGR valve and container of fuel.

If any of these gets cracked, oil can leak with white smoke from exhaust.

However, it’s easier to notice problem when white smoke becomes denser or lasts longer than usual. When it comes to faulty tank problem, we might hardly recognize.

If the fault belongs to the tank or container, fuel comes out and smoke should be gray. It’s quite a common knowledge for any driver. Nevertheless, we’re too confident in what we knew to figure out little mal-functions.

Gray smoke would come from the engine, along with white smoke which are out from exhaust always. Would you be at your best to notice that?

Usually, we don’t until gray smokes all over and outweighs the white. But, when it comes, there must be a lot of money spent.

This must be the most concerned question after all. Concerning from the origin of white smoke, it won’t harm your car so much at first. However, it’s only true at very short and vague clouds of white smoke.

When exhaust starts breathing out not water, you have a situation.

All smoke problem is coming from inside engine so we don’t suggest you to try repairing yourselves. Mechanics are the best to come to if you suspect something wrong about white clouds.

The point of always notice is to save you from paying extra, being fooled by bad service and saving your car.

How to get control of white smoke from exhaust?

When you know the causes, it’s totally possible to control the situation.

1. Get your car checked regularly

It’s very important to stop your automobile at garage frequently. Even vehicles need health check as regularly as human or they’ll malfunction.

The check will give you access to inside of coolants, valve, cylinder head, fuel tank and detect cracks. Early findings will minimize cost, time and frustration costed by problem-to-be.

2. Learn to tell the smokes

When we tell you to observe the smoke, you might say “No way!”
Yeah, you have a way to tell them manually or apply mechanical technologies.

As we tell, white smoke usually comes from water. Therefore, you can expect to sense the evaporation that way.

If it smells nothing, just naturally water, then it’s condense. In that case, nothing to be worried about.

If it smells strange like sweet or the smoke might burst your tears, there’s something wrong. However, we don’t expect you to sense fumes always. It’s not a healthy way and also no manner.

There’s still a plan B.

Leaking or cracking happens mainly because of physical violation of pressure on the part. When the crack happens, pressure inside parts will change, even a little.

So, we have something called pressure testers.

The easiest part to test is the coolant. Coolant operates directly through radiator where you can fit the tester on.

Using the tester can help you find out leaks inside the cooler or at least remove it from the suspicion list.

White smoke from exhaust seems to be a normal phenomenon of car driving. But after reading this article, don’t you agree it can be such simple?

Well, even with experienced drivers, they can be misled sometimes.

Knowing about white smoke also help you to get prepared better on hitting the road. Don’t be so scared but never take it for granted.

Sending your car to garage for checking is good but don’t let it become unnecessary when you are able to know something by your own.