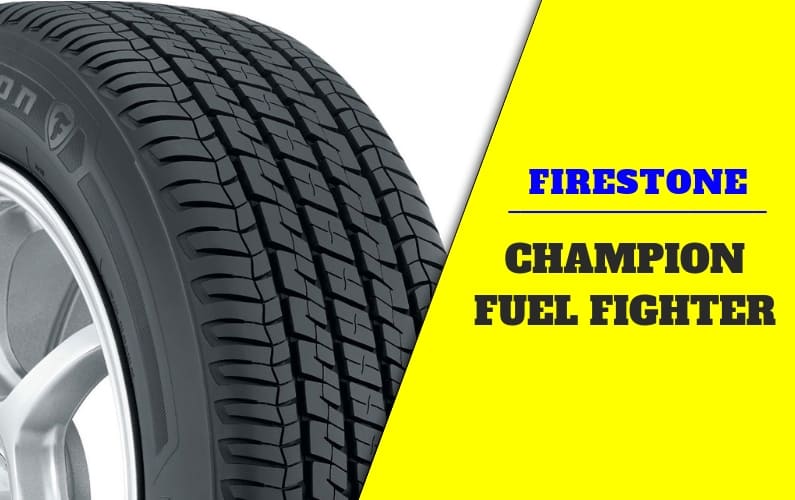 88%
at Amazon.com at TireAmerica.com at TireRack.com at PriorityTire.com at SimpleTire.com

Get Up to $90 Back When You Buy 4 Select Firestone Tires
Valid through April 18, 2022
Available at TireRack.com

at Amazon.com at TireAmerica.com at TireRack.com at PriorityTire.com at SimpleTire.com

Firestone has a very comprehensive portfolio of all-season tires, some of which are comparable to the best premium products in their respective categories. However, some of them are underwhelming, like the FR710 passenger tire, which is beaten by its counterparts in almost every category. Luckily, Firestone also has the Champion Fuel Fighter – an all-season touring tire that’s slightly more expensive than the FR710 but offers much better performance overall.

Interestingly, the Champion name dates back to the first half of the previous century when Firestone was one of the biggest tire manufacturers out there. The decision to use that name again means only one thing – Firestone wants to compete with the best in the standard touring category. To achieve that, the Champion Fuel Fighter must do a lot of things right.

First of all, it should offer reliable traction, grip, and braking in all weather conditions the driver encounters. Then, like all touring tires, it should also be supremely quiet and comfortable, even at very high speeds. And, of course, it should also be long-lasting – standard touring tires usually last for more than five years of all-season driving, and sometimes even more (if you don’t use them in the winter). Be sure that we will tackle all those things in this detailed Firestone Champion Fuel Fighter review.

Before we do that, you should note that this tire is aimed at drivers of passenger vehicles that want a dependable and comfortable solution throughout the year. The Champion is available in many different sizes, aimed at different types of vehicles. That said, the main categories they fall into are sub-compact and compact cars, mid-size sedans, minivans, crossovers, and even some coupes.

That’s a very comprehensive range to be honest, which is expected for a standard touring tire. That said, while some sizes can fit premium sporty sedans like the BMW 3 Series and Lexus IS, we must say that the Firestone Champion Fuel Saver doesn’t offer the sporty feeling behind the steering wheel, nor high levels of grip and traction that drivers of these vehicles expect.

Flash Sale – Save up to 50% Off Select Tires!
Valid through March 14, 2022
Available at SimpleTire.com

What are the features of the Firestone Champion Fuel Saver?

According to Firestone, the Champion Fuel Fighter is a standard all-season touring tire that offers year-round capability, long treadwear, enhanced fuel efficiency, and a comfortable and quiet ride. They continue with saying that the Champion is built to last a long time, backed by the 70,000-mile treadwear warranty, the longest of their entire portfolio right now.

The first thing that’s noticeable, even in the name, is the Fuel Fighter technology. This tech reduces rolling resistance to lower the fuel consumption of your vehicle, without having an adverse effect on grip, traction, and braking performance. Fuel Fighter consists of Fuel Fighter Sidewall Technology, which optimizes the compound design for added efficiency, and Fuel Fighter Steel Cord that provides strength, while also making the tire lighter. This technology is certainly helped here by the Long-Link Carbon silica-enhanced tread compound, which is one of the most advanced in the industry right now.

The tread design is symmetric, and its main purpose is easy rotation. However, Firestone also made sure that the tread is deep enough for excellent traction in wet and wintry conditions. To maximize hydroplaning resistance, the Champion Fuel Fighter is equipped with four circumferential grooves that channel the water out of the tire for improved grip in wet conditions. Snow traction is covered with full-depth tread with biting edges.

Like all standard touring tires, the Firestone Champion Fuel Fighter has a structure that includes one- or two-ply polyester body casing (depending on size), helped by two side steel belts with a spirally-wrapped nylon reinforcement with Firestone Fuel Fighter Nylon Application for increased fuel economy.

While most standard touring tires in the premium have wear indicators built into the tire, Firestone still resists doing that with their tires. Instead, they suggest using the penny test, which by now has become a standard for measuring tread depth. To perform the test, stick a penny in the tire tread grooves. If the tire tread is at least touching Abraham Lincoln’s upside-down head, the tire tread depth is at least 2/32”. This test certainly works fine, but we would’ve still liked wear indicators like in most modern tires these days.

On the positive side, the Champion Fuel Fighter has the best warranty of any Firestone tire at this moment at 70,000-miles or 5 years. This is a pretty good result for the price, but it still trails other standard touring tires – the Continental TrueContact comes with mind-blowing 90,000-mile treadwear warranty, and there are some budget tires that have 70,000-mile treadwear warranty. Still, users around the world report that the treadlife of the Champion is outstanding – nobody reports big problems with wear.

Also, Firestone offers free alignment for the lifetime of your vehicle, provided you only use Firestone tires. This is something that other manufacturers don’t offer and is certainly welcomed, especially because the tires will last much longer that way.

Firestone offers the Champion Fuel Fighter in sizes that will fit most compact crossovers, but that still doesn’t mean that it is designed for off-road driving. This is primarily a road-focused tire, which means that excursions out of the road should be limited to light terrain. That said, like most touring tires, the Champion Fuel Fighter can be driven on gravel, and we must report that it’s pretty good in those conditions, probably due to the deeper tread than usual for this category.

Still, when driving on gravel with these tires attached to your car, we suggest taking care not to overcome the speed limits.

Pretty good, actually. The Champion Fuel Fighter is not the best touring tire in this category, but it certainly competes with the best. Responsiveness is very good for a touring tire, which was not surprising, given the fact that the cheaper FR710 was also very responsive. This also means that the Champion offers stable feeling at higher speeds, which makes it especially good for highway use.

Traction is also excellent, even on more powerful vehicles. The grip is somewhat worse when compared to the best touring tires on the market, but still very good for everyday driving. What’s more important, the Champion Fuel Fighter provides strong braking performance, despite its focus on low-rolling resistance.

And while we’re at the subject of low-rolling resistance, the Firestone should enhance the fuel economy of your car by up to 5%.

While we have no complaints about how the Champion drives on dry tarmac, we have some about driving over wet and slippery roads. Don’t get us wrong – the Fuel Fighter is still a completely safe tire to drive in rainy weather. It’s just that its competitors offer much better grip during hard cornering and the best of them resist hydroplaning better. Still, this is not something that the average driver would notice, to be honest.

Firestone seems to be very proud of the deeper tread of the Champion Fuel Fighter, especially because it provides better snow traction. Well, at least on paper. In the real world, this tire is nowhere near the best touring tires for snow traction. That said, it is much better than the FR710 and still usable in some situations, but not as the primary winter solution. Suffice to say, if you live in areas where it snows often during the winter, you should absolutely replace the Champion Fuel Fighter with proper winter tires.

One of the main reasons people buy standard touring tires is because they are very quiet and comfortable. As expected, the Firestone Champion Fuel Fighter is a very comfortable tire over bumps, despite also being very responsive in the corners. It is also supremely quiet on the highway – up there with the best touring tires. If comfort is what you’re after, you won’t be disappointed with the Champion.

Should I buy the Firestone Champion Fuel Fighter?

It depends, honestly. This is not the best tire in its category for sure, but it is also not the worst. Price-wise, it’s in the middle of the pack, and it competes preferably with most tires in the same price range.

The Champion Fuel Fighter has some disadvantages, namely traction, and grip in wet and snowy conditions, but overall it is still a completely safe, reliable, and comfortable tire. On top of that, it will enhance the fuel economy of your car. Therefore, we reckon you should consider the Champion Fuel Fighter the next time you buy standard touring tires.

Get Up to $90 Back When You Buy 4 Select Firestone Tires
Valid through April 18, 2022
Available at TireRack.com