In other words, all-terrain tires will give you the best combination of safe and reliable on-road handling with confident off-road traction. That is, of course, if you opt for a higher-quality all-terrain tire. Despite the marketing fluff, many all-terrain tires aren’t up to the task of giving you safe handling on the pavement. Moreover, the cheapest entries don’t last very long – you might need to replace them only after 20,000-miles.

Cooper is a manufacturer that we learned to trust when it comes to off-road-capable tires. They are so invested in making excellent SUV and truck tires that they have two all-terrain products – Cooper Discoverer AT3 4S and XLT.

But what are the differences between the two? And, more importantly, which model is the best for your needs? To find out, you have to read through our entire Cooper Discoverer AT3 review, simply because the question can’t be answered directly. For some people, the Discoverer AT3 4S will be a clearly better choice, while for others, it will be the Discoverer AT3 XLT. We compared both tires on the street and in the wilderness to give you the definitive answer.

That said, we don’t recommend these tires for drivers of passenger SUVs or crossovers. Those vehicles lack the off-road capability of a “real” SUV or truck, and putting these tires on won’t help much. On top of that, you will lose on-road handling, stability, and braking when compared to your previous tires.

With that said, let’s see what are the main features of both tires, as there are some interesting technologies and design choices. If you aren’t interested in that, our detailed Cooper Discoverer AT3 review is further down below.

What are the features of the Cooper Discoverer AT3 4S? 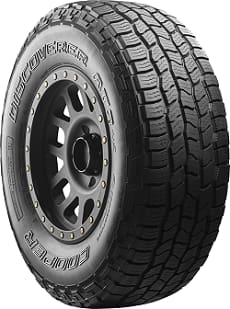 According to Cooper Tire, the Discoverer AT3 4S is an all-terrain tire equipped with the proprietary Adaptive-Traction TechnologyTM, which grips the surface, rocky or smooth, under the most severe weather, rain or shine. That’s a nicer way to describe a tire that’s designed both for on-road and off-road duties.

The main focus of the engineers was to deliver a tire with excellent on-road comfort, advanced off-road durability, maximum grip and handling on wet roads, and improved traction and braking on snow when compared to the predecessor. Cooper Tire promises up to 20 feet shorter braking distances on snow, which is impressive, to say the least.

To achieve those things, Cooper used a silica-based tread compound on the Discoverer AT3. The compound is molded into a Secure-Grip all-terrain pattern, designed for any surface. The tread pattern features an open, five-rib design engineered for improved dry and wet performance, as well as better off-road capability.

Furthermore, the Discoverer AT3 4S is also equipped with circumferential Aqua VacTM Channels and wide, lateral notches for better water evacuation and hydroplaning resistance. Being an all-season tire, the AT3 4S also has Cooper’s proprietary Micro-Gauge ZigZag Sipes that create additional biting edges for better traction on slippery surfaces, such as wet or snowy conditions. According to Cooper, the sipes don’t spoil the tread block stability, thus keeping the dry handling capabilities.

Finally, Cooper also equipped its latest all-terrain tire with the Snow Groove technology, which utilizes saw-tooth block edges in the outboard grooves for better snow traction. To back those claims, Cooper managed to get the 3PMSF (three-peak mountain snowflake) symbol on the tire, which signifies that this tire is ready for slightly harsher wintry conditions, albeit still not on the level of winter tires.

On the inside, the AT3 4S is equipped with a durable two-ply polyester casing, aided by single-ply nylon reinforcement, and two high-strength steel belts. This combination is standard for the category, and it should bring better high-speed stability, responsiveness, and durability.

The Cooper Discoverer AT3 4S is available in many sizes, ranging from 15-inches to 22-inches.

According to Cooper Tire, the Discoverer AT3 XLT is an all-terrain tire equipped with Durable Tread Technology™ for hauling heavy loads with less wear. Moreover, this tire is built to withstand an ongoing assault from dirt and gravel and is available in larger sizes.

The main engineering focus with the Discoverer AT3 XLT was to deliver a tough and durable tire, designed to prevent shredding on rocky surfaces, gravel, and dirt. Cooper touts the tire’s ability for hauling and towing as well, while also saying that the rugged biting edges on the shoulder of the tire deliver extra grip and resistance to punctures.

Interestingly, the company also promises 10 feet shorter braking distances on wet pavement when compared to the predecessor, which is always welcome.

To achieve these things, Cooper employed several technologies and design tricks. Like most modern all-terrain tires, the AT3 XLT features a silica-based tread compound, molded into a “next-generation” tread pattern. This model also employs the Wear Arc Technology that doesn’t exist on the AT3 4S.

Essentially, the Wear Arc TechnologyTM is a shape engineered “to strategically balance pressure at the tire-to-road contact area promoting even on-road treadwear and superior handling.” Unlike the AT3 4S, the XLT also features Whisper GroovesTM that provide a sound barrier and reduce the noise on the highway.

The off-road aficionados will be happy to hear that the Discoverer AT3 XLT is equipped with stone ejector ledges that “easily eject stones and gravel, protecting the tire from stones drilling into carcass and maintaining a clean tread for enhanced road traction.”

Like the AT3 4S, the AT3 XLT has similar internal construction of a durable two-ply polyester casing, aided by single-ply nylon reinforcement, and two high-strength steel belts.

The Cooper Discoverer AT3 XLT is available in many sizes, ranging from 15-inches to 20-inches wheel diameter, as well as 35-inch models for serious off-roaders.

Like every modern tire from Cooper, both the Discoverer AT3 4S and Discoverer AT3 XLT are equipped with maintenance indicators. Basically, these are small rubber inserts built into the tread of the tire.

These indicators are very important for safety simply because they show how much tread there is left on the tire. The tread depth of any tire is used to improve wet traction and braking – without any tread, your vehicle will slide around on every corner.

Like most tires, the minimum tread on this tire is 2/32 inch. When the tires are worn down to this value, the maintenance indicators will be flush with the tread pattern.

That said, given the fact that both of these tires are of the all-terrain variety, you might want to replace them before the tread is completely worn-down. All-terrain tires without enough tread will have severely damaged off-road traction, but also worse wet and snow performance.

What is the Main Difference Between 4S and XLT?

The Discoverer AT3 XLT, on the other hand, comes exclusively in LT-metric sizes, which means that it’s designed for full-size trucks and SUVs. The XLT also comes in higher load ratings, which means that it can be used for hauling very heavy cargo or towing very large trailers.

Are they good for off-road driving? 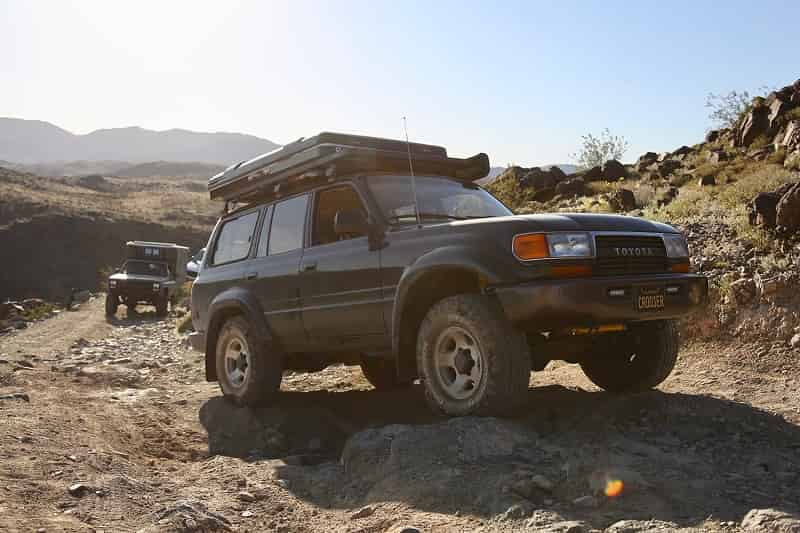 For the majority of people, both tires will perform admirably on off-road surfaces. They aren’t the best choice for real off-road enthusiasts, though. If you are in the search for the best possible off-road traction, then a set of maximum traction off-road tires or mud-terrain tires might be a better option.

Still, in our testing, we found that both tires were very responsive and grippy on hardpacked surfaces, such as dirt and gravel. The tires also provided confident traction on rocky surfaces and very good traction in mud.

Between the two, the XLT comes out on top, though, especially on rocky surfaces and mud. Still, the difference isn’t that big.

How do they behave on a dry tarmac?

On the road, both tires provide the driver with a responsive and reliable experience. The tires react pretty fast to the driver’s input, which was a surprise. Moreover, they had very good traction and grip in the corners, while the braking distances were very short.

Between the two, the Discoverer AT3 4S exhibited slightly more favorable on-road dynamics, but that’s probably due to the lighter-duty design. What you should know is that both tires were completely safe and reliable on the road, even at highway speeds.

How are they over wet and slippery roads?

The Discoverer AT3 4S is clearly better on wet pavement, thanks to the Aqua VacTM Channels and additional siping on the tread blocks. We were impressed with the level of traction, confident and predictable handling, and short braking distances. The AT3 4S also has slightly better resistance to hydroplaning, which is certainly welcome.

Not that the Discoverer AT3 XLT is bad. On the contrary, if you compare it to other similarly-priced competitors, the XLT performs admirably in wet conditions. Handling is safe and predictable, and the braking distances are reasonable. We would’ve wished for slightly better hydroplaning resistance, though.

With that being said, how are they on snowy roads? 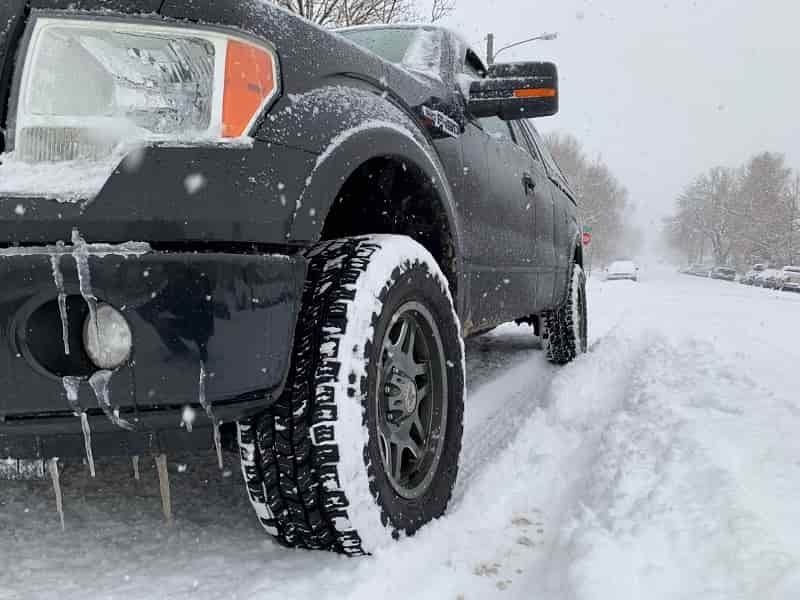 Both tires have aggressive tread patterns, which should translate into better snow traction. However, we found that the AT3 4S drives with much more confidence in the winter.

The 4S is equipped with more sipes on the inner tread blocks, as well as the Snow Groove Technology. That translates into safer handling, advanced traction, and shorter braking distances.

The Discoverer AT3 XLT is still very capable of snow, just not on the level of the 4S. Traction is sufficient in light or unpacked snow, handling is predictable, while the braking distances are reasonably short.

With that said, both tires aren’t the best solution for harsh wintry conditions. They suffer greatly on ice and packed snow. That’s why, if you live in areas with a lot of snow in the winter, we suggest purchasing an additional set of winter tires.

Are they comfortable and refined?

As far as all-terrain tires go, both the 4S and the XLT are comfortable and quiet. We were more impressed with the XLT here – the Whisper GroovesTM really help to reduce the noise on the highway. On the other hand, the 4S seems more comfortable on broken surfaces, but that’s probably due to the lighter-duty construction.

Should I buy the Cooper Discoverer AT3 4S or XLT?

Both the Discoverer AT3 4S and the Discoverer AT3 XLT are one of the best all-terrain tires on the market right now. They work tremendously on the road, both on dry and wet surfaces, provide the passengers with a reasonably quiet and comfortable ride, and even work in the snow.