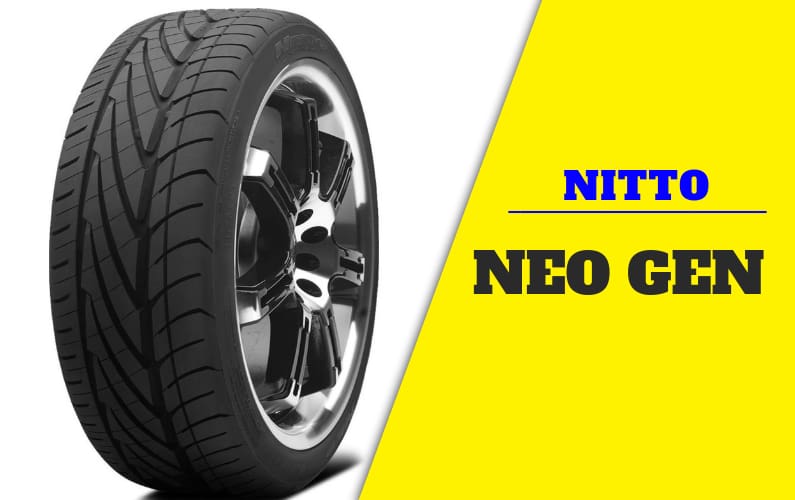 The Nitto Neo Gen performs very well on wet surfaces. It gives you a feeling of constantly being in control regardless of road conditions. Cornering is very good, as you would expect from Nitto. Affordable price, compared to other brands such as the Bridgestone, Michelin, this tire will save you around $180 on a full set, so value for the money is excellent. Overall, Nitto has done a good job with this tire.

The Nitto Neo Gen has been around for quite a while, it manages to combine aggressive and sporting looks with excellent all-season performance. The Nitto Neo Gen is also renowned in the aftermarket tuning industry. You probably heard this tire is particularly designed for lowered vehicles, and I completely understand why they say that.

In this review, you’ll find out the many features and benefits of the Nitto Neo Gen. We’ll also discuss the merits and demerits of this tire. The Neo Gen is an all-season ultra-high performance tire, but it still falls short in certain categories.

What are the features of the Nitto Neo Gen?

You don’t need to look long and hard to discern the Nitto Neo Gen is a good-looking tire. Most of this is attributed to the three-dimensional tread blocks, which is a Neo Gen trademark. It not only adds a sporting style to the tire, but those groovy tread blocks are actually responsible for evacuating water from the face of the tread. Who knew that a clever design had an important purpose as well?

The Nitto Neo Gen also comes with deeper circumferential grooves to complement the slanted 3D blocks. This ensures the tire will resist hydroplaning or aquaplaning as you travel at speed on a wet highway.

This tire also comes with an inner shoulder created from a single, continuous block. This feature is also the reason why the Nitto Neo Gen is touted as an ideal choice for lowered vehicles. Because a continuous inner shoulder block is engineered to improve stability and resist flexing, this feature also maintains stability on lowered vehicles with higher degrees of negative camber.

On the opposite side, the larger outside shoulder blocks are engineered to increase the surface contact of the tire. This improves traction and grip while cornering. This feature also enhances agility and steering feel.

How does it perform in dry tarmac?

This is my minor gripe with the Nitto Neo Gen. This tire looks extreme and it can definitely handle some high-speed driving. After all, this is an ultra-high performance tire we’re talking about. But in terms of outright stability, control, and handling in point-and-shoot driving, the Nitto Neo Gen falls short.

This is not a big issue if you have a stock sedan or sports coupe. But in terms of high-horsepower applications in American muscle cars or European sports sedans, the dry performance of the Nitto Neo Gen is acceptable, to say the least.

But if you want an ultra-high performance all-season tire with better dry traction, take a second look at the Nitto Motivo.

Is it any good in the wet?

Thankfully, those awesome slanted 3D tread blocks are not only designed to make the tire look good. The Nitto Neo Gen feels better sorted in the wet than in the dry, which is surprising for an all-season performance tire. The inner shoulder comes with Nitto’s innovative 3D multi-wave sipes that lock together when accelerating or braking. The sipes have an interlocking ripple design that literally bites the road to improve wet traction.

Again, the Nitto Motivo is better in the wet than the Nitto Neo Gen. But then again, the Motivo doesn’t have the aggressive tread design of the Neo Gen.

Comfort and refinement are not the strongest attributes of the Nitto Neo Gen, but this doesn’t mean the tire delivers a stiff and raucous ride. In terms of comfort, the Nitto Motivo is better. The same can be said for the road noise since the Motivo is quieter than the Neo Gen at higher speeds.

But for what it’s worth, the Nitto Neo Gen delivers acceptable levels of comfort with lower road noise compared to cheaper performance tires. This wouldn’t be a major issue if your vehicle is riding on lowered suspension since you’ll be dealing with a stiffer ride anyway. But for stock applications, the Nitto Neo Gen is fine as long as you don’t compare it to newer generation tires like the Nitto Motivo.

Should I be concerned about treadwear?

I’m glad you asked. In order to come up with a definite answer, let’s compare the Nitto Neo Gen with the Motivo, which also happens to belong in the same high-performance all-season category. The Nitto Neo Gen has a UTQG treadwear rating of 280 while the Nitto Motivo has a score of 500.

When it comes to the UTQG treadwear rating, a higher number is better. This means the tire is able to resist treadwear much longer than a comparable tire with a lower number. Based on these facts, it is easy to discern the Nitto Motivo is expected to last longer than the Neo Gen in terms of tire wear.

But then again, the 3D multi-wave siping with slanted blade texture allows the Neo Gen to ride on a wider tread section in lowered vehicles with negative camber. Due to this feature, the Nitto Neo Gen can last 20 percent longer than the entry-level Nitto NT450 in lowered applications. However, the next-generation silica enriched compound in the Nitto Motivo allows it to have longer wear characteristics than both the Neo Gen and the NT450.

Should I buy the Nitto Neo Gen?

If you have a lowered American, Japanese, or European compact or hatchback, then yes. The Nitto Neo Gen will not only improve the all-season performance of your ride, but it will give the vehicle a delicious and aggressive stance.

The Nitto Neo Gen is also selling at a lower price than the Motivo, so this makes it a good value as well. You get spanking good looks and reliable all-season performance, so what more can you ask for?