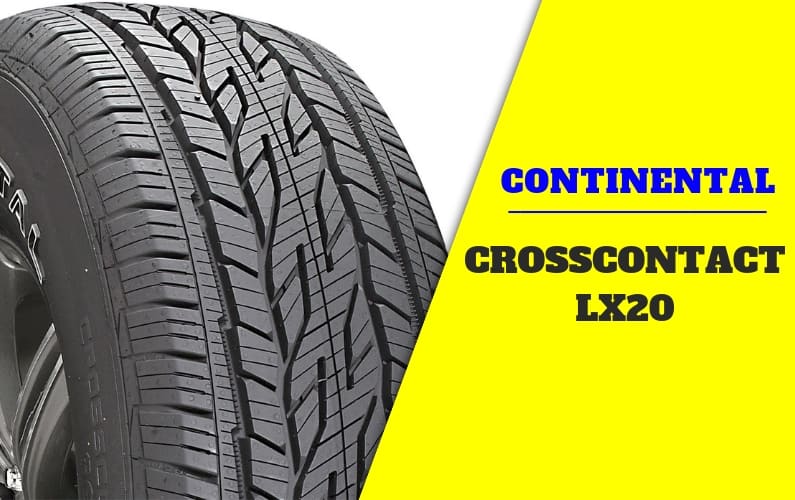 Get Up to $140 Back When You Buy 4 Select Continental Tires!
Valid through June 30, 2022
Available at TireRack.com

SUVs and crossovers are gaining popularity every single day – they seem to be everywhere. But why did that happen? Sedans have served us so well for over half a century, so why the sudden change? First of all, sedans aren’t really “in” anymore, and they are also not able to attack any type of terrain. One could argue that crossovers are also not the best solution for off-road driving, but they still have higher ground clearance on their side. On top of that, crossovers and SUVs are more practical, easier to get into, have better visibility, more space… The list really goes on. The most important thing is that buyers view these vehicles as the jack of all trades. For the average vehicle owner, modern crossovers and SUVs can do seemingly everything.

But, what about tires for SUVs and crossovers? You can’t just put tires designed for sedans on your raised car, or all-terrain tires that were the de-facto standard for SUVs in the past. Luckily, tire manufacturers jumped to the opportunity to sell SUV and crossover owners tires that are designed to work best with these vehicles. Such a tire is the Continental CrossContact LX20. The German company rates this tire as all-season, but also one that is designed to offer excellent traction throughout the year, high levels of comfort, and even some light off-road capability. Rings a bell? It’s the same thing most crossovers and SUVs try to accomplish – to be the jack of all trades in their respective categories.

The Continental CrossContact comes in sizes ranging from 16-20-inches, which is a really comprehensive portfolio. This means that with this tire, Continental covers drivers of compact and mid-size crossovers, premium crossovers, large SUVs, etc. More precisely, starting from vehicles such as the Subaru XV and Subaru Forested, then on to vehicles such as Toyota RAV4 and Honda CR-V, and even super luxurious crossovers such as Audi Q7. That’s a tall order – most companies fail to satisfy the needs of all buyers with one set of tires. Let’s see how the German tire company fares in this detailed Continental CrossContact LX20 review!

What are the features of the Continental CrossContact LX20?

According to Continental, the CrossContact LX20 is a premium light truck, crossover and SUV all-season tire with EcoPlus Technology that provides excellent wet braking, long wear, and enhanced fuel efficiency, and also a tire that’s designed to maximize the driving experience. To achieve all these things, the CrossContact LX20 is equipped made of Continental’s proprietary tread compound with Tg-F Polymers and +Silane additives, which improves treadwear, fuel efficiency, and traction on slippery roads, such as damp surfaces.

The symmetric tread design additionally helps the tire achieve better steering response, straight-line stability, reduced noise, and enhanced ride quality. It achieves that with the notched outboard shoulders, independent intermediate tread blocks, and continuous center ribs. Like most Continental tires, the CrossContact LX20 comes with a large number of circumferential grooves – in this case, four. These improve wet traction under heavy rain, channeling the water out of the tire. Thanks to these design choices, Continental’s tires are consistently among the best when it comes to wet performance. In the end, the LX20 is also equipped with Traction Grooves, another proprietary technology of Continental, which promote three-dimensional snow-to-snow traction.

Given the fact that the CrossContact LX20 comes in light-truck sizes, the focus was put on toughness too. The internal structure of the tire includes twin steel belts reinforced with spirally wrapped polyamide, on top of a polyester cord casing that improves strength, but at the same time enhanced ride comfort. Also, larger sizes of the tire come with a flanged lower sidewall that will protect your shiny new rims against damage.

In the end, the EcoPlus Technology will also save you gas at the pump, and reduce the emissions of your crossover, SUV, or truck.

Like most premium manufacturers, Continental equips its tires with wear indicators are spaced evenly through the main (biggest) grooves of the tread. They are mostly invisible to the eye when the tire is new, but become visible as the tread wears down. When the wear indicators are flush with the tread, tires will not be usable in wintry conditions, and especially in the snow. Suffice to say, when this happens, you should replace your tires.

As for durability, Continental offer 70,000-mile or 6-year limited treadwear warranty, which is one of the best in its category. Most owners of these tires say that they really last for long, but some of them simply don’t achieve the 70,000-mile milestone. Owners of Chevrolet Suburban seem to have the biggest problems with treadwear – they report that even after 25,000-30,000-miles the tire is completely worn down. This can be due to the tire, but also the suspension of that particular vehicle.

On a more positive note, Continental offers 60-day trial test drive for the CrossContact LX20, which is better than what most tire manufacturers will give you.

Considering the fact that the CrossContact LX20 is aimed at owners of trucks, crossovers, and SUVs, it should offer off-road traction, right? Well, that’s not always the case with touring all-season tires, which are designed to be only used on the road. However, the Continental is surprisingly good in light off-road conditions – better than other tires in its category.

It is especially good on gravel roads, where it provides very good traction and braking, but it can also work on light sand or mud, such as the beach or gravel roads covered with water. Overall, a very good showing considering the fact that the CrossContact LX20 is a tire that’s focused most on on-road performance.

Continental made a lot of design choices that improve handling and stability, which results in one of the best driving experiences in its category. I say “one of the best” because there are still tires that perform better, especially in the handling department, but the average driver will be hard-pressed to notice any difference. More precisely, the CrossContact LX20 offers excellent traction and braking on dry roads and very good grip during hard cornering. The tire is also surprisingly responsive, even on larger and heavier trucks and SUVs. Overall, a very good showing for the Continental.

While dry traction and braking aren’t the best in its category, wet traction and braking just might be. Continental consistently makes tires that perform better than their competitors in wet conditions, and the LX20 is certainly one of those tires. It resists hydroplaning like a champ, providing the driver with ample traction and stability in puddles of water. It also works great in damp conditions, beating almost all of its competitors. Braking in wet conditions is also among the best, if not the best among SUV touring tires. Overall, you’d be hard-pressed to find any fault with the LX20 in foul weather – it is one of the safest tires for wet-driving for trucks, crossovers, and SUVs.

Pretty good for an all-season touring tire. That is of course if you only use it in light snow – deep snow is out of the question. For extreme winter weather, winter tires are still the best solution. In other words, if you live in areas with harsh winters and a lot of snow, you might want to replace your LX20’s with a set of winter tires.

Still, when compared to other tires in its category, the Continental consistently beats most of its competitors with traction and braking in light snow, which makes it usable for areas with mild winters.

Overall, few drivers or passengers will complain about the comfort levels of the Continental CrossContact LX20. That said, some touring tires that are direct competitors to the Continental might provide a slightly better ride quality, but that’s only marginal. More importantly, the LX20 is supremely quiet on the highway. There is almost no noise coming from the tire, even at higher speeds – in this regard, the CrossContact is among the best in the crossover, truck, and SUV touring tire category.

Should I buy the Continental CrossContact LX20?

If you’re in the market for touring tires for your truck, crossover or SUV, you should at least consider Continental CrossContact LX20. This tire is consistently among the best in every category, and even outright beats its competitors in some of them. Overall, it is a quiet tire that will give you very good handling and stability, outstanding wet traction and braking, and even some light off-road traction. The jack of all trades for SUV and crossover tires!

Get Up to $140 Back When You Buy 4 Select Continental Tires!
Valid through June 30, 2022
Available at TireRack.com

3 thoughts on “Continental CrossContact LX20 Review: Jack of All Trades Tire for Crossovers and SUVs”